Reaching out with role models 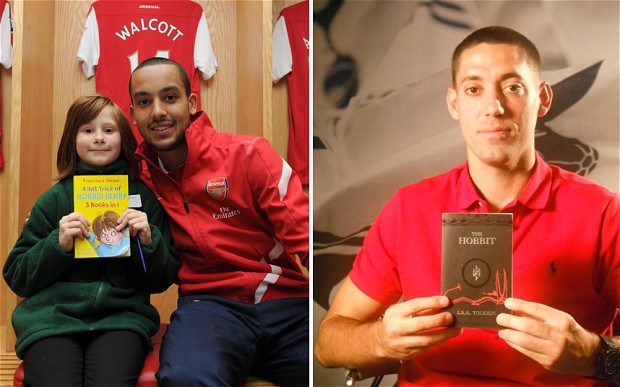 The National Literacy Trust have just send us details of a piece of research they carried out a few year’s ago concerning young people’s role models. The trust was interested in finding out about the kind of role models that could be used to inspire young people to read. Interestingly, while the largest number choose their parents as their primary role models, outside the immediate social environment, sportspeople and, in particular, footballers were mentioned most often.

This is a summary of their findings;

The study found that 78% of children and young people have a role model. These come predominantly from within the immediate family. A fifth of pupils spontaneously mentioned that their role model is either their mum or dad. Sportspersons, footballers in particular, are the most frequently mentioned role model after the immediate social environment. More girls than boys have role models (82% vs. 75%). Girls are also more likely to choose role models from within the immediate family, while more boys chose a sportsperson. Primary pupils were more likely to have role models than secondary ones (81.4% vs. 76.5%), and more likely to say that having a role model who likes reading is important (39% vs.16%). Role models from the immediate family figure prominently for all ages, but more secondary than primary pupils say that their role model is a sportsperson or musician. When the data was examined according to allocation of FSMs, role models from the immediate family figured prominently in the choice of both pupils receiving FSMs and those who are not. However, sports figures were particularly prominent for FSM pupils, who were over twice as likely to choose a sports figure as a role model (15% vs 6.5%) Cultural background, gender, age and celebrity status are largely not important characteristics of a role model. Instead, most choose a role model because of their internal qualities, such as being hard-working, honest and kind/caring. By contrast, only a quarter of children and young people believe that their role model needs to be famous, a reader, good-looking or make lots of money. When asked about figures that could inspire reading, again the immediate family are the most prominent figures, followed by their friends and teacher. The immediate family are the most important in inspiring reading for both boys and girls, but more boys than girls said that a sportsperson, politician, religious figure or cool kids at school inspire them to read. Primary pupils are generally more likely to say that a range of people are very important people who inspire them to read,  while friends at school are prominent in inspiring reading for secondary pupils.

Although the sample size was impressive (2176) there are a couple of methodological issues that might be flagged, notably with regard to the use of questionnaires for this type of research. First, while they are excellent for capturing simple responses to ‘who’ or ‘what’ questions, they don’t always allow you to answer, in any great depth, the key question of why (why are these people role models, why might this or that person inspire you to read). Second, with an issue such as this (reading, role models),  there is a tendency for respondents to offer socially desirable answers, such as ‘my mum/dad is a role model’, ‘reading is important’, ‘role models should be honest and hard-working’ and so on – and there is relatively little researchers can do to probe these responses. Therefore, what we hope to achieve with our research (which is qualitative and much more interested in exploring people’s experiences and attitudes in detail through a series of discussions and exercises) is an understanding of some of these key ‘why’ questions – notwithstanding our very small sample size!!

Image courtesy of the Daily Telegraph