A new strategy for sport 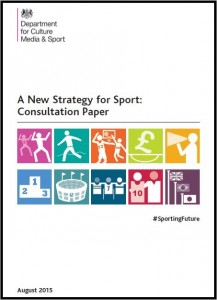 The Department for Culture, Media & Sport has just released a new consultation paper on sport. Partly this is because the last one took place over a decade ago and much of the social and economic landscape has changed since then, notably with regard to funding cuts and the impact of digital technologies. Partly, this is because there is some concern over falling participation rates in sport after a brief post-Olympic spike. As the Minister for Sport, Tracey Crouch writes;

‘This is why we need a new sport strategy. It is time to recognise the importance of sport and be clear how we are going to make it an integral part of our everyday lives … In developing a new strategy we will need to re-think the traditional ways of funding sport participation. We need to embrace technology and appreciate the power it has to get people active. We need to consider how we make sure that everyone – no matter who they are and no matter what their ability – has the opportunity to take part. As part of this we need to ensure that sport is designed to meet the demands of consumers, who each have different motivations and engage with sport in different ways’

Interesting that technology is seen as an enabler in this vision (given the amount of debate around its impact on decreasing activity rates, notably among the young) and that we are now simply dealing with ‘consumers’. Not citizens, not communities, not people but those who just buy stuff. Beyond this, the following bits and pieces caught our eye, particularly in terms of how they relate to this project on how football impacts on and is integrated into the lives of young people.

Sport also has a positive impact on integration, bringing together groups and individuals who might not otherwise interact. During the 2012 Olympic and Paralympic Games, we saw the power of sport to bring people together. But it doesn’t have to be major global events. A local sports club can play just as important a role ensuring that everyone playing has a common goal and a shared interest, showing that sport can be an excellent way to bring together those of different backgrounds.

It is vital that there are strong links in place between schools and community clubs so that all children and young people are aware of other opportunities on offer and feel comfortable crossing from one environment to another.

There are a number of sports that have benefited from lucrative TV deals in recent years. While Premier League football is the prime example, it is by no means the only one. Their success has come in part from developing a successful and marketable brand, and we would not want to do anything that would undermine that. However, their success also comes in part from the broader success and popularity of the sport, something that no NGB or commercial organisation can own. With the success of trading on a public good like sport comes a responsibility to maintain that sport at all levels and for a range of participants including under-represented groups such as women and disabled people. There are some excellent examples of sports reinvesting money generated through the sale of their TV rights into the grassroots, but as income increases further so should the benefits seen at every level.

How to ensure that sports coaching is as effective as possible, at grassroots
and elite level, with diverse representation and reduced barriers to entry, and
that coaches are given the necessary training to work with a variety of clients,
including children, older people and disabled people

High quality coaching can be the thing that makes the difference between building a sporting habit for life and putting someone off sport for life. It is the whole front-line workforce however, that plays a role in creating the right environment for individuals to feel that sport and activity are for them. It is therefore crucial that all staff in a role promoting physical activity, including those in direct contact with the public, have the skills and the continuous professional development they need.
In this context, it is important that sport participants are seen as consumers and that their needs are taken into account. This is not just about technical coaching skills, but also the soft, human skills, behaviours and attitudes which can make the difference between someone wanting to come back and someone feeling that sport is not for them.

Inspirational Athletes – All funded athletes have been asked to give up to 5 days a year to inspire children and young people to get involved in sport. UK Sport manages and monitors this athlete volunteering work via the sports’ governing bodies. The December 2014 survey of this activity confirmed athletes had given more than 10,000 days and the latest survey confirms this has since passed 12,000 days. Future plans include introducing a self reporting app for athletes to report their activities directly.

Given its popularity, reach and influence, football is often looked at differently to other sports. While this should not always be the case there are specific areas where government does have a direct interest and can work to make positive changes. The Coalition Agreement of 201011 and the Culture, Media and Sport Select Committee Football Governance Inquiry in 2011/12 and follow-up in 2013 both recognised the value and growing popularity of supporter ownership, and the need to encourage its further development. In response to this, the Expert Group on Supporter Ownership and Engagement was established in October 2014, with the mandate: “to identify solutions to current barriers preventing greater collective supporter share ownership of football clubs and explore the greater facilitation of supporter engagement and involvement in the governance and running of football clubs”.