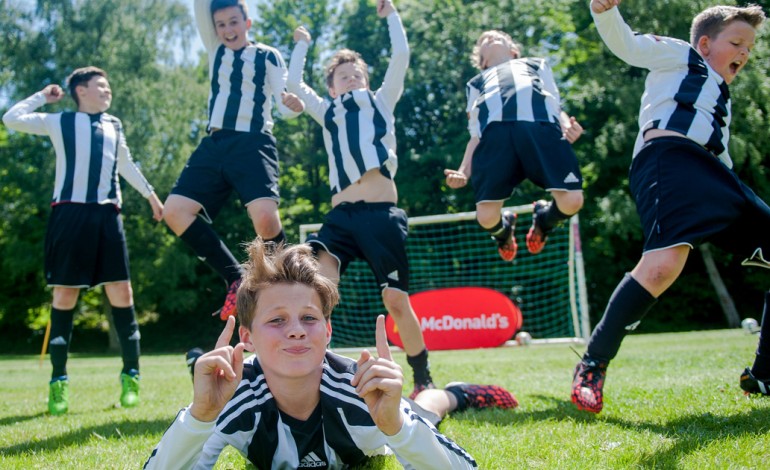 A marketing campaign by the fast food giant McDonalds recently caught our eye as it contributes to the ways in which goal celebrations have become an increasingly elaborate part of the spectacle of both playing and watching football.  In the following video you can see how particular ‘celebrations’ have become so well-known that they have been given their own names!!

As part of the campaign, the company has also produced a couple of interesting ‘features’ that add a further dimension to these activities. Using the ‘knee slide’ and ‘the pitch’ means that the celebrations no longer take place within a game or even on a football pitch. They also mean that you don’t have to play the game, or even really have an interest in football, to participate.

@McDonaldsUK thank you for the tickets we've had such a good weekend so far. #CommunityShield #CelebrateBetter pic.twitter.com/wBwZLGzz8X

The hashtag associated with the campaign, CelebrateBetter, is also noteworthy. First, it contributes to the idea that people should pay time and attention to their celebrations, rather than, say, getting better at the game itself. Second, it suggests that current efforts aren’t good enough!

Our interest in this aspect of the game is linked to a number of different features; first and foremost, how such celebrations are tied to what academics call mediatization, the idea that everyday activities and social organisations become increasingly orientated towards the media. In the case of football, this would include both the recording of professional games by mainstream media organisations as well as the growing use of mobile phone cameras and social media in relation to grassroots football. Although sporting activities are always a performance of one kind or another, the growing presence of media encourages a particular style of performance that is far more reflexive (participants think about how they should present themselves and devise elaborate routines for celebrating their goals – see below) and extravagant (as players become aware of how others are performing).

Second, the influence of the professional game, and its major stars, on ordinary players. For instance, the following clip shows young children playing for Ajax in the Netherlands copying the celebrations of Cristiano Ronado, the Portuguese superstar who plays for Real Madrid!

Finally, its also worth noting that in some cases, the major objective of the game of football – scoring a goal – actually becomes largely irrelevant as players look to perfect their celebrations instead.

We’re still thinking about what this growing focus on celebrations tells us about contemporary football and social life and would welcome any suggestions. Could we view it, for example, as part of the culture of instant gratification, whereby the harder task (of actually working to score a goal) is avoided in order to focus instead on the relatively easy (and also enjoyable) job of celebration? Or is it just part of the wider culture of surveillance, where every action become orientated towards the ever-present gaze of the camera / social media platform?