‘The lack of commitment from … players is frustrating: Football, community and time 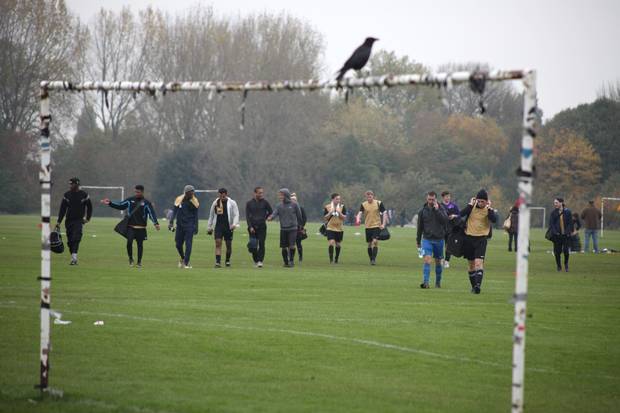 Debates about the significance of community have mushroomed in recent decades both in academic, media and policy circles. Much of this work has tried to address the problems of defining and sustaining a sense of community in a rapidly changing world. Interestingly, what generally links the different approaches is their focus on the spatial dimension of community. Up until recently, community was generally understood as a group of people living in the same place. That is, relatively close knit groups centred on a specific locality where the majority participate in, at least, some shared social activities and, as a result, their relations became defined by a degree of reciprocity and mutual trust. Moreover, this idea(l) continues to inform many of the laments about the perceived loss of community in the contemporary era.

Alternatively, growing physical and virtual mobility, bolstered by wider economic and political shifts, have called into question the assumed link between community and place and led to other ways of thinking about the concept. First, and most obviously, as increasing numbers have become more mobile, they are no longer (as) tied to a locality, whether in terms of where they live, work or play. This would include internal migrations within a state but also the growing numbers who move across borders. Second, digital technologies have provided people with opportunities to not only learn about other places, people and cultures but also form elective communities built around shared interests, needs or values. Online communities of people who share the same tastes in music or film or have an interest in a social or political issue are examples of groups who have a particular characteristic in common but often do not live in close proximity. In order to make sense of these transformations, newer terms such as ‘communities at a distance’, ‘de-spatialized communities’, ‘trans-national communities’ and ‘cross-border communities’ have become increasingly popular.

This focus on spatiality and mobility in relation to both normative and empirical discussions of community has obviously generated a range of useful insights and interesting findings. However, it does tend to overlook another key aspect of community, which is temporality. For example, Bastian’s recent scoping study of research on time and community identified a total of 885 papers of which only 85 were ‘identified as highly relevant’. This is a tiny percentage of what has become an enormous literature on the broader topic. Elsewhere, Delanty’s popular overview of community for Routledge’s key ideas series features five references to space in the index but no mention of time.

This oversight seems rather odd given that any community organised on the basis of shared space or particular characteristics requires developing and sustaining over time. This is a point that is eloquently made by Richard Sennett when discussing the idea of community in his recent book, Together.  Sennett notes the importance of commitment in underpinning any sense of community and identifies a number of ‘tests’ that can be used to evaluate how much the individual is prepared to sacrifice. In discussing these ‘tests’ he observes that ‘short-term commitments can be particularly destructive to the sentiments of obligation and loyalty’ and points to the importance of both reliability (‘the realm of what can be predicted to happen, the most predictable behaviour seeming predetermined’) and a sense of vocation in sustaining any ongoing sense of community.  In a related argument those who have called into question the more celebratory accounts of online community have argued that lasting commitments may be more difficult to sustain. In doing so they point to both the preponderance of ‘lurkers’ (people that simply observe but make no real contribution to discussions, the creation of content and so on) in a given ‘community’ as well as the extent to which joining or leaving  a community is relatively easier compared to the offline world.

In relation to our own study of football and community, we too have found that spatiality matters with, for example, support for teams beyond the local or even national being increasingly common as a result of mediated interactions. However, the temporal dimension, notably the importance of longer-term commitments in underpinning a sense of belonging, has also featured widely in a number of discussions. For instance, we carried out a series of interviews with coaches who worked for community organisations in Sheffield, including Football Unites, Racism Divides and the Sheffield United Community Foundation. When discussing the significance of their role in working with young people from some fairly marginalised backgrounds they pointed to the importance of being given time to develop lasting relationships. This sense of familiarity with each other and the local organisations that maintained the facilities allowed feelings of solidarity and mutual respect to emerge. The value of these anchoring processes are particularly noteworthy given that the lives of many of those involved are frequently beset by problems of instability and unpredictability.

It’s worth noting that some of the interviewees had been coaching for over a third of their lives (starting at around 14 years old) and valued the fact that just as they had been mentored by slightly older players, now they too were passing on their knowledge and values in relation to both the sport and wider behavioural norms.

“That’s just generally the way we’ve… how I’ve grown up; how we used to be with our Youth Workers. And that’s what I learnt and now I want to be like that Youth Worker or Football Coach to the younger lot. And that’s what I like… that’s what made me who I am and I like to follow, you know, follow that practice because I think it worked well with me and it worked well with the people that are around me that come up together, when we came together through the ranks” (Stefan, Local coach)

“So for over the last two years, so now they are got a bit of the progression – there, from here, to the top and you’re seeing that progression over the years and thinking, “Yeah, I had something to do with it.” And even building that rapport with them where we’re not like Teacher/Student relationship like a Coach, even like a friend relationship” (Aziz, Local coach)

A second example that points to the ways in which a sense of community and belonging is nurtured over time relates to active support for local professional football clubs. Of those we spoke to who regularly attended live games, over 65% went with one or more of their parents and we were constantly told how support for the local clubs was passed down through the generations;

“I think it is one of those things where it is parental influence, on a local level they take them to the games, they support them, then they might follow in their footsteps. But I suppose those who are from non-footballing backgrounds, parents that haven’t been involved in football before, they might just take up media coverage and see a team playing a bit more often on TV, so that might become their team.  I think it depends on parent’s influences or grandparents of family influences, but then also linking back to media” (Harry, Local FA representative)

Crucially, the young people whose parents didn’t attend games or support the local clubs tended to follow more glamourous national or even European club. While our study is based on a tiny sample in two distinct parts of the country, the question of how clubs outside the elite level sustain themselves has been the subject of growing debate. In the absence of top-level players and the ensuing media hype, such clubs rely on a commitment borne out of camaraderie and a sense of (local) belonging. But this again requires a level of commitment (to pay good money to watch what are sometimes pretty poor spectacles in all kinds of weathers) that seems rather at odds with the current emphasis on flexibility, novelty and spectacle, both in football and wider society. Indeed, short-termism is what seems to define modern day football, whether that be the rapid turnover of managers (sacked after a run of five bad results), the use of flexible contracts in the lower leagues or, at the grassroots level, the slow death of the local amateur leagues. In the case of the latter, there are growing concerns over funding cuts but also the fact that increasing numbers are unable or unwilling to devote the time to organising such activities;

“I think the traditional game in terms of 11 vs 11 has gone because of people’s work patterns, and the fact that they want to spend more time with their family, they are working hard all week, people then don’t want to spend all their time on a Saturday or Sunday running a football club, turning up, putting the nets up in freezing cold, wet conditions on a Saturday afternoon on a muddy pitch. They don’t want to do that anymore, they want to spend their time with their families and prefer to spend half an hour or an hour playing on a Wednesday night on a good surface, or indoors” (Neil, Local FA representative)

Now, one doesn’t have to get too misty eyed about Sunday league football to acknowledge that the formerly dense network of players, coaches, pubs and workplaces that supported such leagues was surely a factor in sustaining a sense of community for countless people. Similarly, the sense of vocation required to run a team or a league over a sustained period of time may not be valued by all but also forms part of a wider civil society that acts a valuable buffer between government and individual citizens. And the hollowing out of such structures matters.

Elsewhere, at the grassroots level, the local voluntary and charitable organisations we spoke to were struggling not only due to cutbacks by local councils and other funding bodies but also because there has been a fairly recent movement away from long-term funding of core activities (youth work, rehabilitation of offenders, mental health outreach, education) to more short-term project orientated objectives, notably the building of new facilities. These facilities were, of course, welcome but the question remains as to who is going to ensure they are sustainable over the longer-term, which required the far less glamourous day-to-day work that doesn’t make headlines or attract MP’s with an eye on the front page of the local paper. Nonetheless it is these routine activities that sustain whatever sense of community becomes attached to such organisations and the facilities that they manage.

It seems rather obvious to state that generating and sustaining a sense of community takes time, effort and commitment but this idea sometimes gets lost in the rush to understand newer forms of spatiality and/or mobility. Likewise, the consequences of time pressure and the growing validation of novelty and instantaneity need to be theorised both in general terms and when thinking about the significance of community in the contemporary era.