‘The lost soul of the beautiful game’? 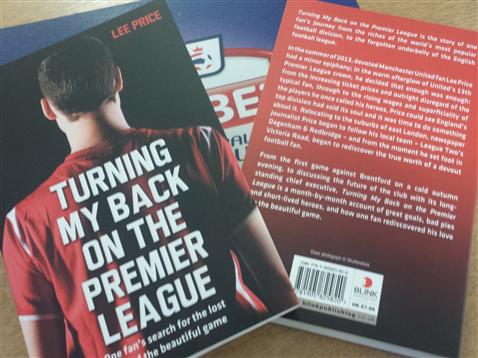 I’ve just finished reading Lee Price’s book ‘Turning my back on the Premier League‘. In it, Price, a long-term Manchester United fan, recounts his experience of following the English League 2 side Dagenham & Redbridge after becoming disillusioned with the hyperbole and spiraling budgets of the Premier League. It’s a fairly standard tale of mediocre football and facilities leavened with the growing feeling of belonging to something meaningful and authentic. At one point, Price writes about his grandfather who watches MK Dons on a regular basis and explains his support in the following terms;

‘I don’t just go there for the result, the winning. It’s for the friendship and everything else we got there. Sure we moan and complain when things aren’t going our way like the best of them – but we’re still there the next week. as much as for the friends we’ve made as anything else. I’ve become a hardened supporter because I’m part of something’

Price then writes, ‘that something is a group, a collective … the notion of a football club being the centre point of a community isn’t a new or novel idea but it’s something I’d never experienced quite so profoundly while following Manchester United’. Subsequently, he goes on to talk about conversations he has had with his own younger brother who lives in Milton Keynes and supports Chelsea. The reason being, ‘the Dons are rubbish’.

As Prices notes, these ideas, around community, belonging and authenticity and the ways in which they are tied to football-related activities, are not new. Much has been made of the deterritorialisation of English professional football as the top tier of clubs now generate support from around the globe rather than a local city or region. Likewise, many of these arguments are framed by a local=authentic / global=ersatz dichotomy and an acknowledgement of the growing power of media to shape understandings of the game. For instance, the Price’s brothers’ allegiances  are almost certainly informed by the success Manchester United and Chelsea were having (and the media coverage they received) in the 90’s and 2000’s, respectively.  Asides from these features, and Price makes useful reference to them all in his book, what struck me about this particular discussion was the generational differences in what the respective members of the Price family were hoping to get from football. Grandfather was less interested in winning and more concerned about friendship and community. For the younger brother winning was presumably everything, part of the need to mark himself out as a ‘winner’ (through association) in the formative years of his life. Price, himself, represented something of a cross-roads between the two. Formerly enchanted by the magic of the Manchester United team (and brand), he was now beginning seek something else, something more authentic, local and  real’.

The life cycle of football fans has been noted before. For instance, where there is no strong family association with a club children often switch allegiances before settling on a team in adolescence. Similarly, a major life transition (moving to a new city, for instance) may prompt a shift in allegiances for the sake of convenience and as a means of building new social networks in an unfamiliar location. However, these existing patterns are often predicated on the assumption that as individuals grow, football will continue to remain a meaningful part of their lives. Whether this will be the case for the next generation remains to be seen as while today’s children retain a healthy interest in playing football and following it through the media, they are increasingly unable to watch the game ‘in the flesh’.

Indeed, as those who attend football matches become increasingly older (with an average age of around 40+), one wonders whether future generations will also see football as a possible source of belonging and community (in the same way that Price and his grandfather do) or if other activities will serve that role, instead?