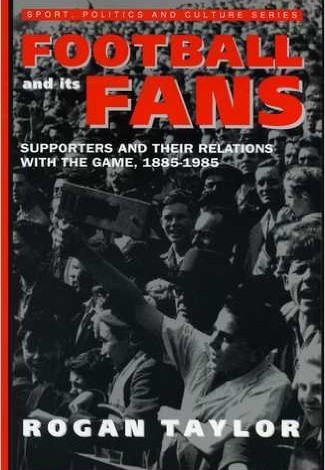 ‘After supporting the team through good times and bad times, we are told to mind our own affairs’

‘Surely we supporters are entitled to some say in the government of the game we support, and surely it’s not asking too much that those in authority should answer their critics’

‘The club is, properly speaking, an institution of the town and not a kind of private trading company, conducted at the whim of the few men who are at the moment immediately interested’

Sounds familiar, right? Complaints about intransigent owners, dismissive authorities and the travails of long suffering football fans have become increasingly high profile in the contemporary era, garnering a good deal of media attention and some political support. And yet the three quotes, above, which are taken from Rogan Taylor’s book ‘Football and its Fans’, come from the 1920’s. Reading Taylor’s book is instructive, not only because there is relatively little on the broader topic of fan’s historical involvement in football but also because it continually points to the continuities between current debates and those of yesteryear (around the commodification of the game, the division between owners, players and fans, the miserable treatment of fans by the authorites, including the police).

This kind of historical perspective is particularly important given the tendency of so many writers to focus on how football has been transformed in the last twenty years. Time and again, academic papers start with the standard arguments around hyper-commodification, the profound impact of the media, growing inequalities between elites and lower leagues, the globalisation of the game and, of course, to some extent they are right. Football has changed, just as society as a whole has changed. But just as some of the more hyperbolic discussions of, say, globalisation need to be tempered, so as to acknowledge that it is a long-term historical process that has intensified in the post-1945 era, so do those around football.

For instance, the commodification of the game has been an ongoing process for over a century. Furthermore, Taylor suggests that it was the demand for on-field success that drove this process as clubs sought to offer inducements to ‘star’ players, often at the behest of fans. These pressures lead to the issuing of shares most of which ended up in the hands of the only people that could really afford to invest any substantial amounts of money, prominent local businessmen. The gulf between fans and ‘shareholders’ was then further entrenched when spiralling costs lead to the creation of a private limited company and a board of directors. Again, the parallels with the current era are only too obvious, albeit with a change in the identity of the owners (increasingly from abroad), the types of financial instruments being utilised (leveraged buy-outs making limited companies seem rather quaint and homely!) and the sheer scale of the finances (and debt) involved.

Likewise, different form of media, from cigarette cards to newspapers and then radio and television, have been impacting on the sport in pretty significant ways for just as long. Interestingly, what Taylor’s book does point towards is the shift in fans’ ability to discuss and then organise more effectively in the contemporary era. In the 1920’s expressions of dissatisfaction with the running of a club or the game as a whole were largely limited to protests outside a ground (which, of course, continue today) and letters to the local or national newspaper. Today, fans are able to use social media to build alliances with each other as well as key social and political actors.  Many have also become far more media savvy in the way that they run protests and engage with wider debates around football as a community asset.

Having said that, Taylor’s nod to the ebbing and flowing of supporter dis/satisfaction in relation to the on-field performances of Leicester City in the 1920’s and 30’s can also be seen in more recent fan debates where a great deal of change can be seemingly accommodated (foreign ownership, a new stadium, changing of the club’s kit and even name!) provided the team is winning on the field. For instance, a recent paper by David Kennedy noted how many Everton fans, in discussing a proposed move to a new stadium outside of the team’s traditional heartlands, supported the move as it was for them key to securing on-field succes. This was particularly important for a club that was no longer able to compete with key rivals, who themselves had built bigger stadia and taken advantage of other commercial opportunities (including accessing foreign funds).

These links between past and present are illuminating in pinpointing exactly what has changed over the last few decades or more. Moreover, they also caution us against viewing the past through rose-tinted glasses. In football, as in other walks of life, it is all too easy to focus on current problems (rising tickets prices, spiralling debts across the football pyramid, player misbehaviour, corruption and so on) and imagine that in the past fans, clubs, players and administrators were all pulling in the same direction. As Taylor continually demonstrates, this was patently not the case!